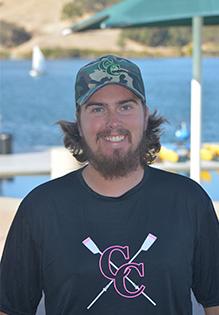 Chris began his rowing career as a coxswain for Iona Preparatory School in New York in 2006. He went on to continue his coxing at Marist College spending four years on the varsity 8. During his summers Chris coxed for Penn AC, Vesper and the United States Under 23 Team. After graduation, Chris moved into the world of finance but quickly realized that he missed the sport of rowing. He then moved to Boston to continue his education at the Institute for Rowing Leadership while being an assistant coach for Harvard Lightweight men. The next year, Chris moved to Marin where he spent a year and a half as assistant coach before becoming interim head coach. During the summer of 2018, Chris moved to Folsom to join Capital Crew where he spent a year as assistant coach for the Varsity Men before becoming head coach.

What is the best part about working at the Aquatic Center?

“The opportunity to work with a group of athletes that are striving to better themselves both on and off the water on a daily basis. Seeing a group of young men and women pushing their limits to achieve a common goal is inspiring.”